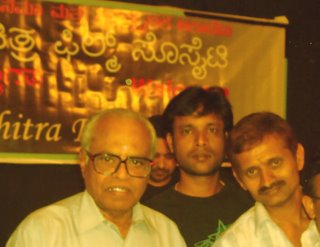 Q) When Kannada filmmakers like Girish Kasaravalli and Malayalam Directors like Adoor Gopala Krishnan are making films with a conviction and seriousness towards film as an art form, why is it that most Tamil film makers, who are not less talented, are making films using a middle path to the so called safe formula of 'not too commercial not too serious and artistic? What is your opinion about this being a director who followed the same path?

A) The answer for such a long question is actually very simple. It’s like that and if I have to add anything, unfortunately, it’s like that. But honestly I am quite happy that I am considered as one among those who took this middle path instead of being an extremist.

Q) Many of your films deal with the social issues, especially, of women. These issue-based films, in the view of the producer, are a huge risk to make as they usually turn out to be failures at the box office. What is your opinion of these producers who put in money to make more money?

A) For those producers who are afraid to take risks they will always find filmmakers who are ready to make commercial formula films. When such films are enjoyable to the viewers it will never be a problem for anybody; everyone is safe, the producer, the director and the viewer except for one thing that is the art itself.

Q) How can one become a filmmaker like you?

A) Whatever I am today is because I worked with 100% conviction all through my life. So, if you are aspiring to be like me I suggest you to deal with art, especially filmmaking, with 100% sincerity, hard work and conviction. 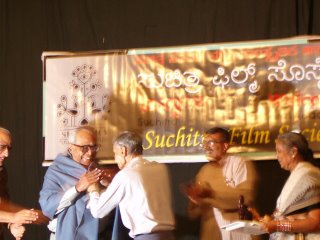 Q) Some shots from your award winning film "Thaneer Thaneer" are similar to the shots from Akira Kurasawa's Ikiru and Godard's Breathless. Is it a possibility that while making Thaneer Thaneer these two film makers and the mentioned films, in particular, would have had an influence on your creative process? Or was it just a coincidence?

A) I have surely watched the films mentioned but I am not really sure if I watched these films prior to the making of "Thaneer Thaneer". I have always been a fond admirer of Akira Kurasawa and his films. If you are accusing (smiles) me of copying the shots from the films of Akira Kurasawa, the master of the art, I say, I am honored that my films carry a reflection of the art of one of the greatest filmmakers of the world.

Q) A scene in Thaneer Thaneer shows two illiterates carrying a newspaper to a man who can read. In this scene the actors’ placement is such that the literate person is seen sitting on an elevated position (on top of a hut) while the two illiterates stand below the hut. While shooting this scene, was that your intention to portray symbolically that a person who is literate will stand above the rest of his illiterate community? Or, like it happens many a times is it a figment of imagination aroused out of the mind of a serious viewer out of an admiration towards the director as an artist?

A) First of all, I feel elated that there are viewers who watch films with such sincerity and I feel so happy that after 26 years of making this film there are unnoticed details that are brought to my notice. As a director I really had no intention to portray that symbolism but today I feel that the symbolism is right and just. It might have been the idea of the cinematographer or some other member of the crew. I am happy that such fine detail of the film is pointed out now. 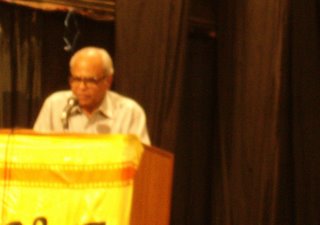 Q) Today, if one would like to watch Satyajit Ray's Pather Panchali or Gurudutt's Pyaasa or for that matter any good Indian film form the past all we get is a poor quality CD or DVD with no subtitles, tarnished image and poor quality sound. That’s true with your films too. Don’t you think that it’s your responsibility as a filmmaker to restore and preserve the films from the past?

A) I totally agree with that point and the concern towards preserving the masterpieces from the past. But sadly the state of affairs of our film industry is very bad. Somebody has to do something about it.

Q) In concern with the previous question, don't you think that it’s your responsibility as a filmmaker to restore and preserve the films that you made as a director and producer? If so what are you doing towards it?

A) I am seriously concerned with the fact that the films from the past are to be restored and preserved for the future generations. But sadly I am just a part of the system. My film "Thaneer Thaneer", sadly' has no existing copy of the negative of the film. The producers who made this film are no more and it makes things even more difficult and impossible. But I am working towards it and I want to stress on the point that it’s high time that everyone in the film industry realized the importance of preserving the films.

Q) Why is it that most of your films deal with the issues of women?

A) May be because I love woman. I like woman and their issues.

Q) You have stated in many interviews that you consider Puttanna Kanagal (Kannada filmmaker), thought younger than you, as your guru in filmmaking. What is it that you learnt from him?
A) Age has got nothing to do with learning. You can learn from anybody and everybody. I liked and admired Puttana Kanagal, because, at the time when many of our filmmakers lacked the vision of filmmaking in terms of visuals he was the one who insisted on films being visual than oral. Apart from that his ability to churn out the human emotions from his actors was one of his kind.

Q) Your film, "Thaneer Thaneer" deals with the same issue, "State against her own people", like the recent film "Rang De Basanti". In both the films the general public or the so-called masses resort to violence in the end and the state fights against her own people. Even after 25 years of your film and almost 60 years of Indian independence do you think that there is no other alternative than taking up gun as a means of liberation?

A) If there were an alternative, people would have come up with that alternative. As there is no other suggestion, for me, history will repeat itself and people will always fight against state or, to be more specific, against the irresponsibility of the state and its measures.


Q) What was the influence of Russian films on you?

A) Quite honestly I haven't watched more than 2 or 3 Russian films.

Q) Long back you were seen in a role different than you are. You were seen in the role of an actor. Why is it that you haven't explored that facet of your life as an actor?
A) I have been an actor from the time I remember. As a director I act out and perform every role from my films. Yes I haven't shown myself on screen much, except from very few roles. I have acted in a minor but a significant role in my forth-coming Tamil film due to be released on April 14th. I hope you will enjoy watching me on screen as much as you enjoyed me behind the screen.

Q) After making waves with your TV serials people thought that you stopped making films. Now you are seen again concentrating on filmmaking. What made you shift back to filmmaking?

A) For me, both film and TV are visual mediums to portray and depict my thoughts and ideas. But my career as TV serial maker made me realize that my thought process is narrowing down. This realization made me to come back into films. I wish to make films with the same conviction.

Q) Of all the films you made what is your favorite film?

A) This is the most common question put to me. This was and is a very difficult question to answer. But I personally feel that "Punnagai", a Tamil film with Gemini Ganeshan and Nagesh in it, is one of the best films I ever made. In that film, I was really able to voice out my opinion and I was able to say something through that film. Sadly, that film did not farewell at the box office and I was not surprised because when I made Thaneer Thaneer I never expected it to be a commercial success. The film "Thaneer Thaneer" which dealt with acute water problems of a drought-ridden village of Tamilnadu was released on the Diwali day of 1981 and that day Tamilnadu witnessed one of a severe rainfall of those days. The distributors of that film were very much disturbed with the rain and of course the fate of the film. But as I believed that one-day's rain of cats and dogs was not the ultimate truth and the truth was far more than that unexpected rain. The people of Tamilnadu were able and ready to perceive and understand the same truth. That was the same reason, I believe, that made this so called art film a major commercial success.