I regret for not having watched Mani Shankar's Tango Charlie. After the debacle of his second film 'Rudraksh', I decided not to watch Tango Charlie. But only today I read the review of it and I feel sorry for being so biased and for ignoring the film. I would definitely watch it in the coming future for what it is but not how it is, as it is a proven fact that the film is bad.

What impresses me is the idea of the film. It is the story of a soldier told through four different tales of four different wars he fought. Again, the novelty of the idea is in chosing the wars. These wars are not the much screened Indo-Pak wars but the day to day internal wars fought with in ourselves, the war with the Naxals, the war with Bodo etc....
Read the review for more info.

Tango Charlie Review:
Coutesy.
http://www.radiosargam.com/movies/moviereviews/t/tangocharlie.htm
BACKGROUND:
The film is based on the director’s thought process which says that Western Europe and the US haven’t fought a war on its soil for the last 60 years because they have always exported their wars to other poorer nations and made them fight. The director also feels that some part of the world is always at war, keeping their armaments industry bulging with profits. And whenever an Indian or Pakistani or Iraqi or Palestinian or Afghan soldier dies, someone in Europe or the US makes a buck. That’s the rip-off economics of war. The result is a film called Tango Charlie, which has a different take than any other war film. Hence Mani Shankar calls his film an anti-war film.

SYNOPSIS:
The film is not about war between two nations, but about the small skirmishes that take place in a country like in any civil war. But here, the emphasis is on this young man Tarun Chauhan alias Tango Charlie (Bobby Deol). Deol has been found on the border – injured. Vikram Rathore (Sanjay Dutt) and Shezaad Khan (Sunil Shetty) locate him in the mountains and then they read his diary which tells them four fascinating tales that Tarun Chauhan has been a part of many wars from the Bodo insurgency in the north east of India which has many victims, to the Kargil conflict which is the most picturised war scene in Bollywood in the past few years and films.

The sory in the first war is about BSF Battalion 101 where he is working with Hawaldar Mohammed Ali (Ajay Devgan), who is the guru of Tarun Chauhan. A Chinese insurgent soldier (Kelly Dorjee) is instigating local Bodos in their war and sponsors their war against the government. Tarun is taught how to fight with such an enemy by Hawalar Mohammed Ali. The sex based jokes shared by the armymen among other things add a lot of fun to this story here.

Chauhan turns out to be a soldier who does not believe in fighting. Unlike in Ab Tumhare Hawale Watan Saathiyon where he wants a life of comfort, Bobby Deol believes in peace. He does not like to kill anyone at all. However he does not mind lifting up the gun to protect his fellow countrymen unlike the soldier Dev Anand played in Prem Pujari of the pacifist soldier who is was court-martialed for not firing at the enemy.

The Deccan plateau in Maharashtra and Karnataka has been witnessing few stories of naxalite attacks. How civilians are made a scapegoat in this fight is the narrative of the second tale.

The fights on the homefront with local hoodlums that was shown in the war film Prahaar also takes place in this film as well – Ajay Devgan replacing Anan Patekar in a similar tale with Devgan in Bengal.

The fourth story is about the Kargil conflict and that’s where the story is set in the climax. By the way, Mohamed Ali has a love interest and so does Tarun. But they don’t really matter to the story.

CRITIQUE:
The film terraces the walk of the foot soldier. It is not the story of the top armymen. Bollywood stars have mostly played senior officers in the defence forces. Tango Charlie changes that. The film emphasizes on the thought that war is brutal and terrifying. It reduces us to our most inhuman and cruel selves. The shuttling between different stories tells us that India is burning all around its borders. Each day several Indian soldiers die in a war of attrition in many theatres of conflicts.
The director has tried to say that hush descends in every street of Srinagar and the fear is so thick you can cut it with a knife.

If these thoughts are true, they should have been part of a documentary film and not a feature film. The film unwittingly is camouflaged like the hero in the attire of a war film.

There are two love stories and two music directors in the film in the form of Anu Malik and Anand Raaj Anand. Both of them could have been shot down like enemies before the war or rather the film had not started. These commercial elements thus impacted the growth of the film into what could have been a powerful docudrama at least. The film thus does not remain true to its thought that songs are not a part of a war film.

Ajay Devgan excels in his performance and so does Bobby. The women are wasted. Kelly Dorjee makes a decent debut. I am waiting to see him work with girlfriend Lara Dutta soon. It is these performances and the thought behind the film that sets it apart.

CONCLUSION:
Tango Charlie needed a better name to have some commercial chances. Many have not even understood the name of the film.

An Extract from "The Wretched of the Earth"
Not so very long ago, the earth numbered two thousand million inhabitants: five hundred million men, and one thousand five hundred million natives. The former had the Word; the others had the use of it. Between the two there were hired kinglets, overlords, and a bourgeoisie, sham from beginning to end, which served as go-betweens. In the colonies the truth stood naked, but the citizens of the mother country preferred it with clothes on: the native had to love them, something in the way mothers are loved. The European elite undertook to manufacture a native elite. They picked out promising adolescents; they branded them, as with a red-hot iron, with the principles of Western culture; they stuffed their mouths full with high-sounding phrases, grand glutinous words that stuck to the teeth. After a short stay in the mother country they were sent home, whitewashed. These walking lies had nothing left to say to their brothers; they only echoed. From Paris, from London, from Amsterdam we would utter the words "Parthenon! Brotherhood!" and somewhere in Africa or Asia lips would open "...thenon! ...therhood!" It was the golden age.

It came to an end; the mouths opened by themselves; the yellow and black voices still spoke of our humanism but only to reproach us with our inhumanity. We listened without displeasure to these polite statements of resentment, at first with proud amazement. What? They are able to talk by themselves? Just look at what we have made of them! We did not doubt but that they would accept our ideals, since they accused us of not being faithful to them. Then, indeed, Europe could believe in her mission; she had hellenized the Asians; she had created a new breed, the Greco-Latin Negroes. We might add, quite between ourselves, as men of the world: "After all, let them bawl their heads off, it relieves their feelings; dogs that bark don't bite."
Posted by Venkat at Friday, March 10, 2006 No comments: 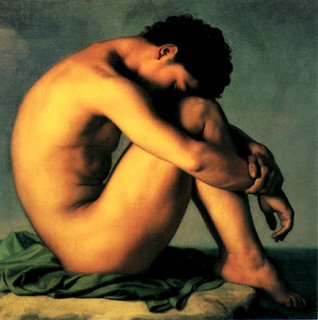 I seek refuge in art
I find solace in her
I hear God in music
I see myself in you
Posted by Venkat at Friday, March 10, 2006 No comments:

Empty yourself of everything.
Let the mind rest at peace.
The ten thousand things rise and fall while the Self watches their return.
They grow and flourish and then return to the source.
Returning to the source is stillness, which is the way of nature.
The way of nature is unchanging.
Knowing constancy is insight.
Not knowing constancy leads to disaster.
Knowing constancy, the mind is open.
With an open mind, you will be openhearted.
Being openhearted, you will act royally.
Being royal, you will attain the divine.
Being divine, you will be at one with the Tao.
Being at one with the Tao is eternal.
And though the body dies, the Tao will never pass away.
Posted by Venkat at Friday, March 10, 2006 No comments:

The ancient masters were subtle, mysterious, profound, responsive.
The depth of their knowledge is unfathomable.
Because it is unfathomable, all we can do is describe their appearance.
Watchful, like men crossing a winter stream.
Alert, like men aware of danger.
Courteous, like visiting guests.
Yielding, like ice about to melt.
Simple, like uncarved blocks of wood.
Hollow, like caves.
Opaque, like muddy pools.
Who can wait quietly while the mud settles?
Who can remain still until the moment of action?
Observers of the Tao do not seek fulfilment.
Not seeking fulfillment, they are not swayed by desire for change.
Posted by Venkat at Thursday, March 09, 2006 No comments: 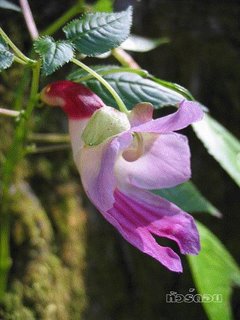 Parrot Flower
Posted by Venkat at Thursday, March 09, 2006 No comments:

Look, it cannot be seen - it is beyond form.
Listen, it cannot be heard - it is beyond sound.
Grasp, it cannot be held - it is intangible.
These three are indefinable;
Therefore they are joined in one.
From above it is not bright;
From below it is not dark:
An unbroken thread beyond description.
It returns to nothingness.
The form of the formless, the image of the imageless, it is called indefinable and beyond imagination.
Stand before it and there is no beginning.
Follow it and there is no end.
Stay with the ancient Tao, move with the present.
Knowing the ancient beginning is the essence of Tao.
Posted by Venkat at Wednesday, March 08, 2006 No comments:

Accept disgrace willingly.
Accept misfortune as the human condition.
What do you mean by "Accept disgrace willingly"?
Accept being unimportant.
Do not be concerned with loss and gain.
This is called "accepting disgrace willingly".
What do you mean by "Accept misfortune as the human condition"?
Misfortune comes from having a body.
Without a body, how could there be misfortune?
Surrender yourself humbly;
then you can be trusted to care for all things.
Love the world as your own self;
then you can truly care for all things.
Posted by Venkat at Tuesday, March 07, 2006 1 comment: