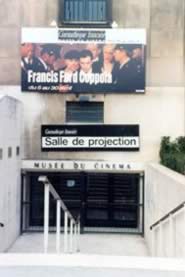 In 1936, Henri Langlois created the Cinematheque in Paris, France. Since then Cinematheque Francaise is regarded as a centre for film preservation and restoration. Cinematheque of
France has acquired a multitude of films from around the world and it hosts the largest archive of film related documents and objects from around the world. It holds screenings of a variety of films from all parts of the world. The credit for such a huge and diverse collection goes to Henri Langlois along with Jean Mitry and George Fanju.
The collection's origin stems from the intensive efforts of Henri Langlois in the 1930s to collect and preserve old films. Langlois had acquired one of the largest collections in the world by the commencement of World War Two, only to have it nearly wiped out by the German authorities in occupied France, who ordered all films made prior to 1937 be destroyed. He and his friends smuggled huge numbers of documents and films to unoccupied France to protect them until the end of the war.
After the war, the French government provided a small screening room, staff and subsidy for the collection, which was first relocated to Avenue de Messine. The great French filmmakers of the 1940s and 1950s, including Robert Bresson, Rene Clement, Henri-Georges Clouzot, and Jacques Becker, all frequented the screenings at the Cin�math�que after the war. The new wave school of directors � Alain Resnais, Francois Truffaut, Jean-Luc Godard, Claude Chabrol, Roger Vadim, Jacques Donial-Valcroze, and Pierre Kast � also received much of their film education by attending the collection's screenings.
Cinematheque Francais literally gave birth to the Nouvelle Vague. Henri Langlois was evicted from his Cin�math�que in February 1968 by the De Gaulle government after which the cineasts from all over France round up and obtain his reinstatement, creating a kind of general rehearsal of May 1968. (Watch �The Dreamers� by Bernardo Bertolucci for more info). He was also the creator of the Mus�e du Cin�ma at the Palais de Chaillot, " Le fant�me d'Henri Langlois " makes live again this unic man, rewarded by an oscar in 1974, through archives and testimonies of famous people.
After moving from one small screening room to another through the 1950s, the Cin�math�que moved to its current spacious building at the rear of the Palais de Chaillot at Place du Trocad�ro in Paris' 16th arrondissement in 1963. The current location houses a state-of-the-art screening room that is one of the best in Europe.