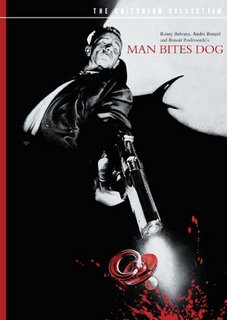 Man Bites Dog is a pseudo-documentary that follows the killing sprees of the murderous Benoit (Benoit Poelvoorde). With cameras rolling, he calmly explains his theories about killing people and weighing down the bodies so they won't float to the surface of whatever river or lake he dumps them in. He then proceeds to slaughter person after person, respecting neither age nor sex nor race, and murdering in a wide variety of ways from strangulation to a bullet to the head. All the while, the film crew trails him, heedless of the danger they put themselves in, and uncaring as they are drawn deeper and deeper into the psychotic, criminal world of their subject.

As a short, this could have been a brilliant, blistering satire on society's views of violence and how it relates to movies. However, Man Bites Dog is a full-length feature and, as such, spends a little too much time with its subject. Thirty minutes, or even forty-five, would have been a perfect length, but by the end of the third half-hour, certain elements of this movie (namely Ben's endless philosophizing) have grown tiresome. The violence has lost its edge. Nevertheless, despite the possibly-excessive length, there is still a lot to praise in this obscure effort by a trio of previously-unknown Belgian film makers. They have taken violence in the cinema to its ultimate limit and created an always-irreverent, often darkly funny look at killers and victims.

Every moment of this film is shot documentary-style in grainy black-and-white. This pseudo-realism, complete with choppy editing and unsteady, hand-held camera shots, gives an eerie air of legitimacy to Man Bites Dog. Added to that, the three main characters in the film all use their real names. The film makers are Remy and Andre, and the killer is Benoit.

Benoit possesses an especially interesting personae. Heartless as a killer, he's actually a fun guy to be around most of the time. He loves his girlfriend and adores his family. He's smart and thoughtful, often giving lengthy discourses on various aspects of life and death. Then, the next thing you know, he's blowing someone's brains out or raping a woman while her naked husband looks on in horror.

An issue addressed by Man Bites Dog is how intimately the media becomes involved in the stories they cover. Are they simply reporting the facts or, by their mere presence, are they participating in events? Here, the movie makers slowly come to assist Ben in his crimes. At first, it's just little things like shining a light in a certain spot, but it doesn't take long before they're actually joining in.

One of the most incisive moments in the film comes when Ben has a shoot-out with another killer. After Ben kills his rival, the film crew catches up with him standing over the body. At that moment, another group of men with cameras show up -- they were doing a documentary about the exploits of the now-dead man. Dark, twisted humor like this characterizes Man Bites Dog.

Obviously not a movie for everyone, Man Bites Dog boasts graphic displays of murder and rape. There's very little of the human body -- inside or out -- that isn't shown at one time or another during the course of this movie. Nevertheless, if you do venture to see Man Bites Dog, you would have to be made out of stone to miss the visceral, sardonic impact of a highly-unusual film.

Review By James Berardinelli
Posted by Venkat at Tuesday, December 13, 2005